Molecular evolution and retroviruses are the main interests of the laboratory. Our activity is centered on the human immunodeficiency virus (HIV), the etiological agent for the acquired immunodeficiency syndrome in humans. Two research axes are developed, both involving the genetic diversity of this virus.

One topic consists in the study of genetic diversity of HIV and its evolutionary trajectories. The transmission of viruses from animals to humans is a major threat to human health. Several independent zoonotic transmissions of simian immunodeficiency viruses (SIV) to man have generated the human variant of these viruses, HIV. These events have created different phylogenetic clusters of HIV. However, not all these clusters have had the same epidemiological success. For example, group M of HIV-1 is responsible for the pandemic, while group O is by far less prominent worldwide. The reasons for this difference are only partially known. Through the comparative functional characterizations of proteins and RNA sequences of isolates from these two phylogenetic groups, we study their peculiarities, which could be indicative of the adaptation pathways followed by the different viruses in the human host. Furthermore, this approach can reveal new or specific functionalities of the motifs studied. Currently, we are interested in the study of the viral enzyme integrase and of a structural component of HIV, the capsid protein.

The second part of our activity is centered on the use of lentiviral vectors for generating molecules of interest in sight of biomedical applications. We adapt a procedure developed in the laboratory to perform directed evolution of genes in cell culture in order to obtain new functions (or to modify pre-existing functions) in proteins or RNAs that can be then employed in anticancer viral therapy. Viral envelope proteins and proteins involved in signal transduction are the current main targets of our work. These researches are carried out in the context of the federation of laboratories of excellence of the University of Strasbourg (“Thematic Interdisciplinary Institutes”) focused on the vectorization of molecules of interest for the human health (InnoVec). 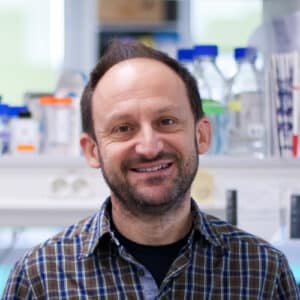