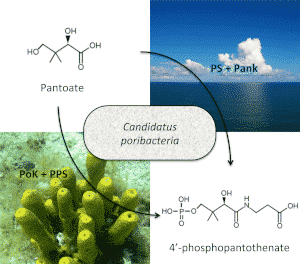 In an article published on December 15, 2020 in Genome Biol Evolution, Luc Thomès et Alain Lescure describe the unusual presence of an archaeal pathway for biosynthesis of phosphopantothenate, a precursor of Coenzyme A, in a group of unclassified bacteria, Candidatus poribacteria. This observation was unexpected, since the use of the two alternative pathways has been proposed as a phylogenetic marker to distinguish between bacteria and archaea. Moreover, the presence of the archaea enzymes appeared to be limited to the sub-group of poribacteria living in symbiosis with sponges, as free-living poribacteria were shown to use the classical bacterial pathway. These observations indicated that the utilization of the archaeal metabolic route might be part of the sponge/bacteria interaction.