Selenoprotein N participates in the regulation of calcium in the endoplasmic reticulum. 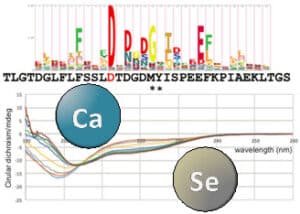 Calcium is one of the most important intracellular messengers, controlling a plethora of functions, from muscle contraction to the secretion of neurotransmitters or oocyte fertilisation. Calcium concentrations in the different cell compartments are very different, but the signals that control transport between these different compartments remain little known.
Selenoprotein N is a protein containing the trace element selenium in the form of the amino acid selenocysteine. In its mutated form, this protein is responsible for various forms of muscle diseases affecting the trunk muscles. Despite much work, the reaction catalysed by SelenoN is still unknown to this day, limiting the development of therapeutic treatments. In this publication, Alain Lescure’s team in collaboration with Ester Zito’s team in Milan has shown that the SelenoN protein is an oxido-reductase sensitive to the concentration of calcium in the endoplasmic reticulum, and participates in the control of calcium exchanges between the cytoplasm and the reticulum.