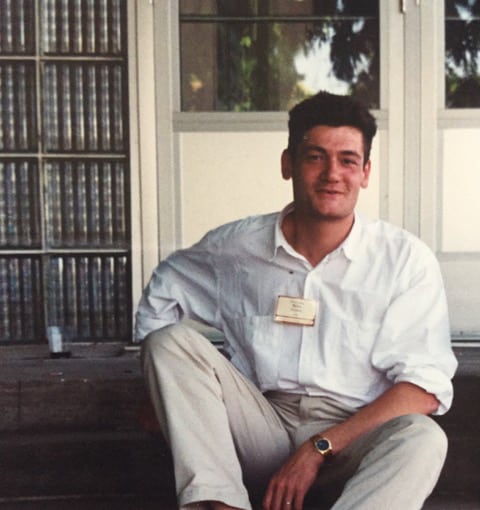 On March 5, 2021, we learned of the sudden death of Brice Felden, Professor of Biochemistry and Molecular Biology at the Faculty of Pharmacy at the University of Rennes-1, and director of the INSERM research unit U1230 “Bacterial regulatory RNA and medicine”.

Brice arrived at IBMC in the research unit (UPR 9002 CNRS) directed by Bernard Ehresmann, in 1991 after successful studies in Pharmacy in Nancy (Thesis in 1992), with the desire to develop a project related to the decoding of genetic information and with a long-term perspective of finding new therapeutic strategies. This idea of combining fundamental, applied and clinical research has accompanied him throughout his career. He joined for his DEA internship, Eric Westhof with whom he learned the rules of RNA folding and modeling, and continued his thesis (defended in 1994 and he was awarded for the best thesis prize of the university de Strasbourg) in collaboration with Richard Giegé, Catherine Florentz and Eric Westhof, where he has explored the structural mimicry of the 3 ‘ends of various plant virus RNA genomes with tRNAs. From that time on, Brice was continuously a purveyor of hypotheses and conjectures which he always subjected to experimentation. A flagship example has been the prediction and the demonstration of the activity of a circular RNA-based aminoacylation system interacting with a histidine acceptor oligonucleotide (notified in a review from Paul Schimmel in PNAS). With emerging international recognition and multidisciplinary expertise, in 1996 he joined the laboratory of John Atkins and Ray Gesteland in the United States (University of Utah) where he decided to study the tmRNA, a multi- functional RNA whose function in the quality control of proteins in bacteria had just been solved. Through phylogenetic analysis, he solved the tmRNA folding which remained a pioneering study in this field. Back to France after six years, he obtained a position as a Professor at 32 years old at the University of Rennes where he set up his team on bacterial trans-translation and where he made significant contributions of the recognition of tmRNA by the ribosome in collaboration with Reynald Gillet and Venki Ramakrishnan. However, Brice wanted to turn on pathogenic bacteria with the conviction that by studying the function and the mechanism of action of new non-coding RNAs, he would come up with innovative strategies for designing new antibiotics. This project received strong support from INSERM in 2004 where it was able to bring together a group of researchers with multidisciplinary skills to solve the function of several non-coding RNAs in various pathogenic bacteria including Staphylococcus aureus, to identify new toxins regulated by antisense RNAs, and to mimic these small peptides with promising anti-microbial activities. We will remember Brice as a warm researcher, imaginative and brimming with ideas, curious, passionate and a great producer of knowledge.