The Research Unit has a longstanding history of scientific excellence in the field of insect endocrinology and immunology. Founded at the Institute of Zoology and General Biology by Professor Pierre Joly (1915-1997), the laboratory initially focused on the neuroendocrine and endocrine control of molting and reproduction of the grasshopper Locusta migratoria, a major pest in subsaharian Africa. Highlights of the activity in the 50ies and 60ies were the discoveries of the role of various neuroendocrine (pars intercerebralis) and endocrine tissues (corpora allata, corpora cardiaca, prothoracic glands) in the coordinated control of growth, pigmentation, phase differentiation (solitarious versus gregarious), vittellogenesis and diuresis. When Jules Hoffmann became director in 1978, the interests shifted to chemical and biochemical analysis of the hormones produced by the neuroendocrine and endocrine control centers, namely to peptidic neurohormones, to the terpenoid juvenile hormones and the steroid molting hormone ecdysone. Highlights of that period were the unravelling of the biosynthetic and metabolic pathways of ecdysone and the unexpected discovery of a massive synthesis of this hormone in follicle cells of reproductively competent female adults of Locusta. 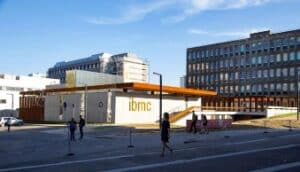 In 1980, Jean-Marc Reichhart and Daniele Hoffmann started a small group on insect immunity. The laboratory became interested in these antimicrobial defenses, and from the 90ies on, shifted its interest from endocrinology to the field of antimicrobial defense in Drosophila. This change was concomitant with the move of the group to the CNRS Institute of Molecular and Cellular Biology on the same campus. The studies of the laboratory rapidly showed that Drosophila mounted an efficient antibacterial and antifungal response when experimentally challenged with a variety of microorganisms. They further showed that a hallmark of this response was the challenge-induced synthesis of seven distinct families of antimicrobial peptides. Using these inducible antimicrobial peptides as read-outs, the laboratory then engaged in genetic studies aimed at identifying the gene networks controlling their challenge-induced expression in immune-responsive tissues. A highlight of this period was the discovery by the laboratory that two distinct pathways control the expression of antibacterial versus antifungal peptides and that the antifungal defense relies on a signaling cascade largely similar to that controlling dorsoventral patterning in the Drosophila embryo. Of particular interest was the discovery that the Toll transmembrane receptor controls an immune response in an animal model. Similar transmembrane receptors had not been identified in the innate immune response and the result of the immune function of Toll in Drosophila has been credited for paving the way to the discovery of Toll-like receptors in mammals at the end of the 90ies, and more generally, to rejuvenating the interest in innate immunity.

Other highlights of the studies of the laboratory was the genetic demonstration of the roles played by circulating pattern recognition proteins in sensing microbial ligands (PGRPs, bGRPs) and activating intracellular signalling cascades culminating in the activation of NF-kB family members. Of particular relevance for these studies in Drosophila were large-scale unbiased mutagenesis screens, which led to the identification of a plethora of genes whose roles are mandatory for an efficient response to infection.

As of January 2006, UPR 9022 is headed by Pr. Jean-Marc Reichhart, assisted by Research Director Charles Hetru. The Unit consists of five groups : two concentrate on sensing and signaling during fungal and bacterial infections, and on various aspects of host-pathogen interactions. These two groups are headed by Jean-Marc Reichhart and Dominique Ferrandon respectively. The group studying virus-insect interactions is supervised by Jean-Luc Imler. Elena Levashina is in charge of the Anophelesproject, in the frame of a CNRS/Inserm joint team. Finally, a new team working on Alzheimer’s disease in a Drosophila model has been created around Dr. Hiddehiro Fukuyama (“Avenir” team Inserm). Charles Hetru (bioinformatics, proteomics, structural studies) and Jules Hoffmann, now Emeritus, variously interact with the five groups.