Structure and dynamics of biomolecular machines

> En > Arn > Teams > Structure and dynamics of biomolecular machines
Back

Zika (ZIKV) and Dengue (DENV) are mosquito-borne viruses belonging to the Flaviviridae family. With an estimated 390 million new infections every year, DENV is considered by the World Health Organization to be the most critical mosquito-borne viral disease worldwide. Regarding ZIKV, it was a relatively obscure pathogen until 2007, when it started causing outbreaks in Pacific islands and later in the Americas, with a massive outbreak in Brazil in 2015-2016. Currently, no efficient treatments or vaccines are available against these viruses. Considering that DENV and ZIKV circulate in both vertebrate and invertebrate hosts, targeting specific steps of viral replication would be an efficient strategy to block viral transmission and disease spread. The development of new specific antiviral strategies against ZIKV and DENV requires a precise understanding of key steps of the viral lifecycle. RNA viruses often harbor, within their genomes, multifunctional non-coding structured regions. The 5’ and 3’ untranslated regions (UTR) in the genomes of DENV and ZIKV are very conserved and have important functions during viral replication.

The 7SK small nuclear RNA (7SKsnRNA) plays a key role in the regulation of RNA polymerase II by sequestrating and inhibiting the positive transcription elongation factor b (P-TEFb) in the 7SK ribonucleoprotein complex (7SKsnRNP), a process mediated by interaction with the protein HEXIM. P-TEFb, a heterodimer comprising the cyclin T1 and the cyclin-dependent kinase CDK9, is also an essential cellular factor recruited by the viral protein Tat to ensure the replication of the viral RNA in the infection cycle of the human immunodeficiency virus (HIV-1). Tat promotes the release of P-TEFb from the 7SKsnRNP and subsequent activation of transcription, by displacing HEXIM from the 5’-hairpin of the 7SKsnRNA.

This hairpin (HP1), comprising the signature sequence of the 7SKsnRNA, has been the subject of three independent structural studies aiming at identifying the structural features that could drive the recognition by the two proteins (HEXIM and Tat), both depending on similar Arginine Rich Motifs (ARM). Interestingly, four distinct structures were determined under different conditions (pH, salts). We used Isothermal Titration Calorimetry (ITC) to determine the thermodynamic signatures of the Tat-ARM and HEXIM-ARM peptide interactions with the RNA under different conditions, and we show that they are associated with distinct binding mechanisms.

HIV-1 reverse transcriptase (RT) is a key enzyme in the life cycle of the virus, converting viral genomic RNA into proviral DNA. It is also a cornerstone of anti-HIV therapy, as half of the individual compounds that inhibit viral replication target the RT polymerase active site. HIV-1 RT inhibitors are divided into nucleoside-like RT inhibitors (NRTIs), which compete with the natural nucleoside substrate, and non-nucleoside RT inhibitors (NNRTIs), which bind to a hydrophobic pocket adjacent to the polymerase active site. We performed biophysical and structural studies on two new RT inhibitors: a DABO analog that emerged as one of the most active RT inhibitors reported to date (Ec50 = 25 pM), and DAVP-1, a non-nucleotide RT inhibitor with an unusual mechanism of action. The crystal structure of HIV-1 RT bound to DAVP-1 revealed a novel binding site close to the catalytic site of RT polymerase.

We also addressed the mechanism of action of RT and non-nucleoside RT inhibitors (NNRTIs) by isothermal titration calorimetry (ITC). Using a novel incremental ITC approach, a step-by-step thermodynamic dissection of RT polymerization activity showed that most of the driving force for DNA synthesis is provided by initial dNTP binding. Surprisingly, the thermodynamic and kinetic data led to a reinterpretation of the NNRTI inhibition mechanism. NNRTI binding to preformed RT/DNA complexes is hindered by a kinetic barrier and NNRTIs interact primarily with free RT. Once formed, RT/INNTI complexes either bind to DNA in an apparent polymerase-compatible orientation or form high-affinity dead-end complexes, with both RT/INNTI/DNA complexes unable to bind the incoming nucleotide substrate.

Riboswitches are non-coding elements upstream or downstream of messenger RNAs that, by binding to a specific ligand, regulate transcription or translation initiation in bacteria, or alternative splicing in plants and fungi. We studied the aptamer domains of the thiamine pyrophosphate riboswitches (TPP) of thiC and thiM in E. coli, which regulate transcription and translation, respectively, and that of THIC in A. thaliana. For all of them, we established an induced adjustment mechanism with an initial loose binding of TPP (characterized by the kon and koff parameters) subsequently transformed into a tight binding after an RNA conformational change (characterized by the kF and kU parameters). Using our kinITC approach, we obtained the temperature dependence of all kinetic and thermodynamic parameters for bacterial riboswitches. The results imply kinetic regulation, which requires RNA polymerase to stop after the synthesis of the riboswitch aptamer. A quantitative model of regulation highlighted how the pause time must be related to the initial TPP binding kinetic rates to achieve an ON/OFF switch in the correct TPP concentration range. We verified the existence of these pauses and the model’s prediction of their duration. The A. thaliana riboswitch, in contrast, is under classical thermodynamic control and showed considerable temperature dependence of its folding kinetics, suggesting that it may also act as a thermosensor. Our analysis also showed that kinetically regulated riboswitches respond more strongly to changes in ligand concentration than thermodynamically regulated riboswitches. This rationalizes the interest of kinetic regulation

The HIV-1 dimerization initiation site (DIS) is a conserved hairpin in the 5′ UTR of genomic RNA. Alteration of DIS affects RNA dimerization, packaging, and reverse transcription, and reduces viral infectivity. The DIS loop initiates genome dimerization by forming a loop-loop complex and is subsequently stabilized, presumably in an extended duplex form by interaction with the viral NCp7 nucleocapsid protein. We solved the crystal structures of the DIS kissing loop and the extended duplex. Our structures revealed similarities to the A-site of the bacterial 16S ribosomal RNA, which is the target of aminoglycoside antibiotics. As a result, we showed that aminoglycosides bind to HIV-1 DIS. Surprisingly, the affinity of these molecules for the kissing loop of DIS is higher than for their natural target in bacterial ribosomes. Their binding strongly stabilizes the loop-loop complex and prevents its conversion to duplex form, even in the presence of NCp7. We have also solved numerous high-resolution X-ray structures of the DIS kissing-loop complex and the extended duplex bound to several aminoglycosides. However, identification of the molecular driving forces important for DIS/aminoglycoside binding could not be achieved by considering structural data alone, highlighting the importance of collecting thermodynamic and structural data for a complete understanding of the molecular recognition process.

Using ITC microcalorimetry, the thermodynamics of aminoglycosides binding to the duplex and kissing-loop forms of HIV-1 DIS was studied under a range of conditions. With the structural data provided by high-resolution crystal structures, we were able to establish the basis for the specificity of drug/RNA recognition and allow discrimination between specific binding sites and potential competing secondary sites. We were also able to show that drug binding to the DIS kissing-loop complex inhibits NCp7-assisted conversion in the extended duplex form. Using all these data, we could rationally design an aminoglycoside conjugate that specifically binds to HIV-1 DIS RNA. Our results show that it is possible to target the HIV-1 DIS dimer before and after NCp7-assisted RNA maturation with the same molecule.

We have solved a 27-nt RNA structure at subatomic resolution (0.57 Å). At this resolution, most of the hydrogen atoms in the RNA, as well as some hydrogens in the aqueous solvent, are visible. Furthermore, at such ultimate resolution, the model of independent spherical atoms cannot be applied and strain densities are visible. Therefore, we are currently refining the structure using multipole refinement methods.

Development of a new stepwise approach: the RIP method. We had reported that one of the main causes of failure of the MAD technique with bromo- or iodo-uridines was due to X-ray induced cleavage of the halogen atom. By considering the cleavage of these anomalous scatterers as generating a “native” from a “derived” crystal, we were able to complement the progressive loss of the anomalous signal used in the MAD phasing by this concomitant MIR-like signal. We have now strengthened the method by showing how to monitor the extent of cleavage at any time during data collection.

An alternative for MAD phasing is to use selenized RNA (increased radiation resistance). However, modification of RNA by replacing one or more 2′-OH groups with one or more 2′-SeCH3 groups is chemically cumbersome and expensive. Therefore, we developed a strategy based on preliminary screening of 2′-OCH3-modified RNA crystallization, prior to replacement of the 2′-OCH3 groups with their 2′-SeCH3 counterparts.

We have implemented major methodological developments in isothermal titration calorimetry (ITC). First, ITCs that provide kinetic information similar to data usually obtained by surface plasmon resonance, as well as thermodynamic information usually recovered by ITCs. In partnership with Software for Science Development, our kinITC strategy has been implemented in the AFFINIMETER ITC data processing software

Multimeric sliding clamps for DNA (also known as β-rings) confer high processivity to replicative DNA polymerases. They are also molecular centers on which many proteins involved in DNA metabolism interact by binding, via a conserved peptide sequence, in a universally conserved pocket (Figure).

In bacteria, the interaction pocket is a potential new target for the development of new antibacterial compounds, which are urgently needed to control and overcome the growing bacterial resistance to antibiotics.

We use a structure-based approach to design peptides that bind to the interaction pocket with high affinity, compete with DNA polymerases and trigger cell death. This project is conducted through a multidisciplinary and integrated strategy resulting from a close collaboration between seven different laboratories, combining chemical synthesis, molecular modeling, structural, biophysical and biochemical analyses and in vivo evaluation of the ligands’ efficacy to inhibit bacterial growth and infectious processes.

In this collaboration, our task is to produce β-rings from different bacterial origins and to analyze the interaction of newly designed peptides with these rings, using biophysical techniques such as ITC, X-ray crystallography and mass spectrometry. 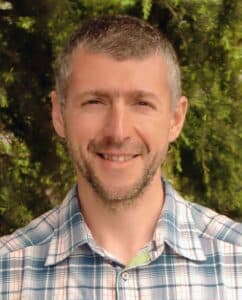